[Read part one, part two, part three]  The Friday before the first Monday of senior year, I came back from an evening at Up Your Alley – still close to the coldest beer I’ve ever had – to find that our house was burning down.  The fireman saved a lot of our possessions. But with the fire starting in the garage and attic, it burned straight through my room next to the attic. What I was wearing was pretty much all I had left. By Monday, we were living in an apartment on Noel road near the mall. Our apartment was in the far back upstairs so we could see Alpha from the walkway.

We bought furniture for the apartment at Sears. Over the years, if it had to do with tools, yard equipment, or appliances, and furniture on occasion, we got them at Sears. When I stopped showing up at home to live “for just a little while” for the final, last time, I bought things at other places. But when Cyndy and I and the boys moved into this house eight years ago, we got appliances at Sears. Even after shopping around.

Ten years or so after we bought the furniture at Sears for the apartment, I worked at Sears as a “facilities engineer” in the morning before the 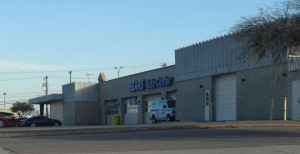 store opened. Besides being a cleanup person – there wasn’t a carpet I didn’t clean on the second floor facing the mall – I had two other part-time jobs. One I don’t really remember. The other was writing a music/entertainment column for the North Richland Hills News, which is long gone now.

Fast forward to last year when our youngest son, J.D., got a job at Sears while he was home from school for Christmas. We hadn’t been to the mall Sears for some time. Buying stuff while J.D. was working there brought back a lot of old memories. Which is a good thing considering its future.