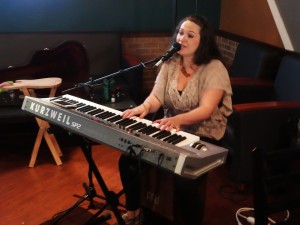 The Dallas Songwriters Association 3rd Saturday showcase on September 16, was held in the lounge at Plano Super Bowl (PSB) due to a last minute change. Angela’s at the Crosswalk has been sold and the new owner cancelled all music indefinitely. Julie Holmer, one of the former owners, assisted DSA in finding a location because of the sudden announcement.

The showcase was from 9-11 p.m. – as opposed to 7:30 – 10 at Angela’s. League play at the bowling alley ends at 9 p.m. and open bowl begins. The sound system was set up so that the performers  were playing to the people in the lounge, but could be heard by customers walking into PSB and bowlers on that end of the building.

Colleen Francis opened the show at 9. With the casual bowling atmosphere, she played 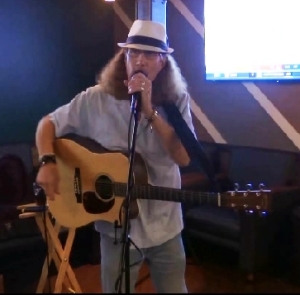 mostly originals, but threw in a few covers. The crowd in the lounge was fluid, mostly consisting of bowlers coming in from the bowling lanes and people waiting for a lane. While there was little applause at the end of songs, it was obvious people were listening and looking in to see who was playing. Colleen’s set included her songs, Wildflower, and crowd favorite, Better Than This.

Host Dan Roark followed Francis at 9:45. While people moved in and out of, and by, the bar, he played River That Flows and the Aardvark song among others. A small crowd of people were standing in the bar when Dan played Chocolate Eclairs and Apple Fritters and I Got My Ass Kicked in Nashville to finish his set. The security guard was seen tapping his foot and nodding his head. 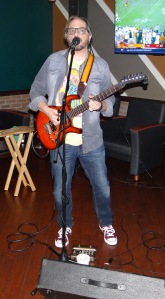 Jeff Stachowski began to play about 10:20 for the final set of the evening. He began with his love trilogy: It’s Not Love, 99 Postcards, and Month of Mondays. He also played crowd favorites, 5 Miles of Smiles, and Little Green Men. Jeff also has a band called PROPELLER. Being a comedian in a former life, Stachowski mixes humor with his music.